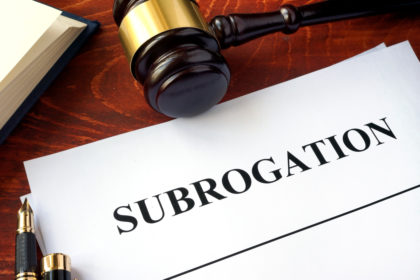 This article seeks to clarify the term “subrogation” and what this means to you as the insured. The central topics of discussion are primarily, what subrogation is, the doctrine of subrogation under English law, the insurers right to subrogation and the requirements for subrogation.

The doctrine of subrogation

The doctrine of subrogation, as established under English law, is founded on the avoidance of unjustified enrichment of the insured to the detriment of the insurer and on the principle of equality.

It can be simply described as the substitution of one party for another or the insurer stepping into the shoes of the insured and describes a legal right that provides for the reimbursement of an insurer that has previously indemnified an insured in accordance with the terms provided for in the insurance contract.

The Insurers right to subrogation

Insurance contracts are automatically subject to the doctrine of subrogation and furthermore, subrogation applies to all rights that an insured may have against a third party, as long as those rights serve to compensate the insured for the loss which he/she has already been indemnified against by the insurer.

The precedent for the indemnity principle in insurance law that founds the doctrine of subrogation can be seen in the case of Castellain v Preston (1883) 11 Q.B. 380, whereby an insured who had contracted to sell a property, instituted a claim under a fire insurance policy with his insurer when the property was damaged by fire prior to the sale. The purchaser nevertheless paid over the purchase price to the insured and the insured found himself unjustifiably enriched (as he received payment from both the purchaser and the insurer).

The insured argued that the money paid to him by the insurers was irrelevant to the fact that the purchaser honoured the contract and paid across the purchase price. He further argued that even if the money received due to the sale of the property was not irrelevant, that it did not impact his right to claim the insurance monies as a result of the fire.

Pursuant to the above, an insurer may only subrogate the rights of an insured if all the requirements of subrogation are met.

The doctrine of subrogation is a valid and enforceable part of South African insurance law and is applicable to both the insured’s rights against a third party, whether it be under the law of delict or contract, and to rights that have been wholly or partially substituted. As such, it is important that members of the public that enter into contracts of insurance understand this right and act in accordance with same in a manner that does not prejudice the insurers rights.

Failing to properly appreciate and apply the doctrine of subrogation can prove prejudicial to an insured as, case dependant, this could result in the insurer either claiming  the return of any payment made by themselves to the insured based on unjustified enrichment or alternatively could possibly result in the insurer rejecting the claim of the insured party. Insurance law can be complex and easily misunderstood. If you as a consumer are in doubt as to whether your insurer has a valid right of subrogation, speak with your broker or legal advisor for clarity.