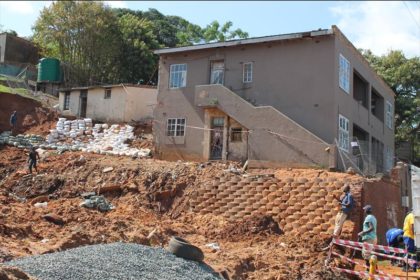 This issue is regulated by the National Building Regulations and Building Standard Act (“NBS”), the Promotion of Administration of Justice Act (“PAJA”), any By-Laws that a municipality may have promulgated in relation thereto, the Spatial Planning and Land Use Act (“SPLUA”), the relevant Town Planning Schemes, the Constitution and lastly also the common law.

Caveat:  As this is an area of law in which building and town planning law intersect with neighbour law, property law, contract law, and constitutional and even administrative law, it can be relatively tricky to understand what remedies are available to an affected person in any particular situation. When in doubt, always consult a property professional.

In terms of the NBS, it is the responsibility of the local authority (i.e. the municipality) to enforce compliance with the relevant building laws. This essentially means that where you are faced with a situation where you would like to prevent the continued construction of an illegal building, or you would like to go even further and obtain demolition of that illegal building, you would normally first approach the building department at the applicable municipality for assistance. It is the duty of this department to enforce the relevant laws and ensure that the illegal building is dealt with in terms of the applicable laws.

To the extent that the municipality fails or refuses to take action, or is simply not taking adequate action, or is too slow in taking that action, or that action has proven ineffective, it is legally possible for owners to approach a court for an order enforcing compliance with the laws themselves, although the legal basis for that kind of application might not be in terms of the NBS and might be located in other laws.

Type of Court Order Applied For

Regardless of whether the local authority or another interested party, such as a neighbour or community, approaches the court, the type of order normally sought to deal with an illegal building would be either a prohibitory interdict preventing the offending builder from continuing to build illegally, or a mandatory interdict requiring the demolition of the illegal building or illegal portion thereof.

Will a Court really grant us a Demolition Order?

It has been assumed for many years that courts are reluctant to grant demolition orders on the basis that it will cause severe financial harm to the owner of the property being demolished. Van der Walt, however, argues that from an analysis of the relevant case law, it appears that this is not true, and that more often than not when a proper case is made out for a demolition order of illegal buildings, the court will grant these types of orders.

What if I am Unhappy with the Approved Building Plans?

If you only become aware of building works that you believe violate your rights as a neighbour after the plans for those building works have already been approved, and the offending builder is building in accordance with the approved plans, your only recourse is to approach the courts for an order declaring that the municipality’s decision to approve those building plans was legally flawed and should be set aside. When the plans are set aside as having been wrongfully approved, there will be no approved building plans in place for the building in question, which will render it an illegal building in terms of which you can seek a demolition order or prohibitory interdict to stop further building (if the building is not yet complete).

What if I am Happy with the Approved Building Plans, but the Building is not Built in Line with them?

If there are approved plans but the building is not being built in accordance therewith, or has already been built contrary to these plans, you could complain to the municipality and require it to enforce the relevant building laws to deal with the illegal building, failing which you could yourself approach a court for an interdict to stop the illegal building (if construction is ongoing) or to demolish the illegal works.

Enforcing compliance with building and town planning laws can be tricky if the municipality does not come to your aid satisfactorily. In such a case, you might need the assistance of a property professional to advise you on the matter and to guide you to the best solution for your particular needs. There is no “one size fits all” solution and every case must be dealt with on its unique facts. Approaching a court for relief is often your only viable option, especially where the offending neighbour is not amenable to reaching settlement or agreement with you and where the building plans have already been approved.