Is South Africa Ready to Return to the trial “By Peers”: i.e. The Juror System? 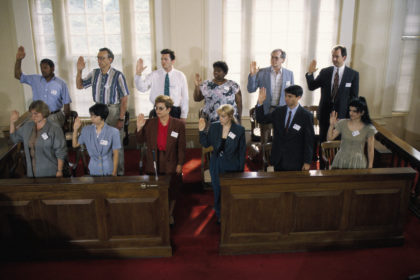 The theatrical, electrifying performances of lawyers in popular American television series, battling it out in a quest to appeal to the emotions of a jury and to swing the verdict in their favour, is the basis of the following discussion.

The jury system can be traced back to the early12th Century. It was aimed at ensuring that no accused should go to prison without being tried by his peers1. Juries were chosen from among the community in which the trial would be held. It involved 12 randomly chosen individuals hearing evidence in a serious criminal matter who, based on the facts of the case, were tasked with determining a verdict, i.e., whether or not the accused was guilty. Selected civil cases like fraud or defamation would also have a jury. It was a well-received system, such that most people would prefer judgment by a jury as opposed to the one by a Magistrate or Judge, who they generally found to be harsher. The USA heavily popularised the jury.

The Juror in the US (George Floyd’s Murder Trial)

It took 12, unnamed and unseen jurors 10 hours to deliberate whether the white policeman Derek Chauvin was guilty of the murder of George Floyd, an African American3. This racially charged case, caused by the ongoing police brutality against African Americans, would have risked the safety of the jury if known. Of the 12 juries, six were white, four were black and two were multi-racial. According to Cable News Network (CNN), the selected jurors came from Hennepin County, which is 74% white and 14% black. One would ask, would demographics have played a role? We can only speculate.

The Introduction and Abandonment of the Jury System in SA

In 1827, the British brought with them the jury system, introducing it first at the Cape Colony and later at the Natal province4. Sadly, only whites could be jurors until the system was revisited (using assessors that included blacks in an otherwise all-white court system). The jury system was abandoned in 19695, by the passing of the Abolition of the Juries Act 34 of 1969. The system was said to have neither contributed to the delivery of higher standards of justice nor contributed to participatory democracy, as it left out Africans.

The jury system in SA was eventually replaced by assessors who were laypersons and helped Magistrates in deciding a proper sentence to be given, especially for community-based punishments. Factors used to consider when appointing assessors included the accused’s culture and academic background, but they needed not to be legally trained, nor possess special skills regarding the matter at hand.

Disadvantages of the Jury System in SA.

Disadvantages that caused the abandonment of the jury system included: the excess powers that were granted to the Minister of Justice to decide whether a case should have a jury or not – often-times deciding not to; laymen becoming reluctant to serve as juries; the strict criteria for choosing juries making it less attractive and prohibitive; and many people’s fear of racial prejudice by the jurors6.

Imagine this: an all-African jury sitting in on a trial of a white individual accused of raping an African girl-child in a restaurant’s restroom, or an all-white jury presiding over a trial of an African who killed a white farmer while they slept. Racial prejudice may not be ruled out in these instances. Considering the racial composition of the jury in USA’s Derek Chauvin trial, one is tempted to think race, ethnicity, or culture playing a significant role in South Africa could be overrated. Others think South Africa is different from the US and such factors are bound to have an adverse effect on the decisions made by a juror in SA than the US.

Re-introduction of the Jury system into SA – Advantages

There is a proposal to reintroduce the system in civil matters based on the notion that it aids in bringing into the justice system the participation of ordinary South Africans in the administration of justice7. The juror system, so the argument goes, brings justice closer to the people. The proponents of its reintroduction suggest adapting or modifying the assessor system into a hybrid and modified jury system to counter the disadvantages cited above. This, they find, will help in the acceptance of the relevance of the SA legal system by the citizens.

Re-introduction of the Jury system into SA – Disadvantages

Hiemstra argues that that the use of lay people as jurors to make complicated decisions of fact brings back the same reason that the system was abolished in 19698. The fact that juries do not give reasons for their decisions and the idea that a right to appeal cannot be granted based on invalid and insufficient reasons that would be given by the jury makes it an unideal system as per Mullineux9. The privacy of the deliberations also makes it impossible to appeal as the defendant will never know how they arrived at the decision without the benefit of following the individual and collective thought processes.

Based on the advantages and disadvantages of the jury system, does South Africa really need a jury to bring justice closer to the people? Would a hybrid jury system be a better version of what was abandoned in 1969? Do the benefits outweigh the disadvantages? Lastly, can the reader imagine themselves as a juror in a case against his or her own peers? Unless and until implemented, many such questions will remain unanswered.

This is a discussion on SA’s possible return to the juror system.