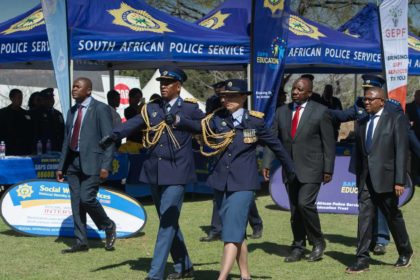 This matter deals with an appeal against the dismissal by the regional magistrate in the Mthatha Magistrate’s Court, of the first and second appellants’ (“Appellants”) damages claim against the first to third respondents (“Respondents”), for their unlawful arrest and detention.

In relation to the question of vicarious liability, the Appellants referred to the third respondent (cited in their amended particulars of claim as “Warrant Officer Qotoyi) as being “a member of the South African Police Service, who was at the time when the cause of action arose, stationed at Maclear Police Service Station, Maclear.”

In their particulars of claim, the Appellants also referred to two unknown members of the South African Police Service. Other than this, in citing the first respondent (the Minister of Police) it was stated by the Appellants that the first respondent “is vicarious (sic) and strictly liable for wrongful conduct committed by the members of the South African Police Service while acting in the course and scope of their employment.” However, nowhere in their particulars of claim did the Appellants allege that indeed the police officers referred to, in acting as they did, acted within the course and scope of their employment or duties with the first defendant. In paragraph one of their amended plea, the Respondents pleaded that “it is denied that the liability of the state against wrongful acts and/or conduct of the Members of South African Police Services arise out of vicarious liability as alleged by the Plaintiff”, whatever that may mean.

During the giving of evidence by the second witness for the Respondents, the constable who had taken over the matter as the investigating officer and who had nothing to do with the arrest of the Appellants, brought to light the fact that it was discovered that warrant officer Qotoyi was not in fact a police official, but an employee of Netstar Vehicle Tracking Unit.

Despite the allegation in the plea that the arresting police officers had “entertained a suspicion… that the plaintiff had committed an offence which is referred to in Schedule one of the Criminal Procedure Act…” the case ultimately argued by the Respondents appeared to be that the arrest was lawful by virtue of the fact that Qotoyi was entitled to arrest pursuant to the provisions of section 42 of the Criminal Procedure Act, dealing with a civilian arrest.

In this regard, the court held that “the magistrate was entirely incorrect in finding that the Respondents had discharged the burden of proof which rested on them. As alluded to, their plea raised a lawful justification of the arrest based on section 42(1)(b) of the Act.” That section reads as follows:

“40.    Arrest by peace officer without warrant

(1) A peace officer may without warrant arrest any person-

(b) whom he reasonably suspects of having committed an offence referred to in Schedule 1, other than the offence of escaping from lawful custody;”

“It is abundantly clear that the reasonable suspicion must reside in the mind of the peace officer as at the time of the arrest of the person concerned. Qotoyi was not a police officer and therefore not a peace officer. Soboyisi was mentioned as being an “officer” but at no stage did the Respondents prove that Soboyisi was a “police officer” and therefore a peace officer. In any event, Qotoyi maintained that he had arrested the Appellants, not Soboyisi, and, furthermore, there is no evidence whatsoever that Soboyisi entertained any suspicion, let alone a reasonable one. In my view, the Respondents ought to have failed on this basis alone.”

Lastly, the court held that even if it were to give a vast amount of leeway in that regard and consider whether or not Qotoyi had the right in terms of s 42 to arrest the Appellants and that, on that basis, the police officers who detained the Appellants were “clothed with legality in doing so”, the Respondents “ought to have failed on that score as well.”

Qotoyi had made no allegation in his statement that the Appellants had committed or attempted to commit any offence in his presence, and there was no statement to the effect that he “reasonably suspected” the Appellants of having committed an offence referred to in schedule 1 of the Act. The magistrate, therefore, ought to have found that the Respondents had not established that the arrest itself was lawful and, that being so, the subsequent two and a half days’ detention was also unlawful. To simply detain the Appellants, on the direction of a civilian who had arrested them, was not sufficient and there had to be an interrogation of some sort to ensure that the arrest was lawful. In the circumstances the court considered an award of damages of R 90 000 for unlawful arrest and detention to be appropriate.

The Court held that:

“(a) There will be judgment for the plaintiffs as against the first defendant in the sum of R90,000 each;

(b) The first defendant is ordered to pay the costs of the action.”

In this matter, the court was tasked with considering the lawfulness of an arrest and detention of the Applicant, which arrest was made by a civilian. The court considered Section 42 of the Criminal Procedure Act 51 of 1977, which dealt with a civilian arrest. In casu, the court held that it was abundantly clear that a reasonable suspicion had to reside in the mind of the peace officer at the time of the arrest of the person concerned.

Mtshemla and Another v Minister of Police and Others 2020Download
Download PDF Article
Share Article:
Tagged under: Coronavirus, COVID-19, department of employment and larbour, employers, OHSA, WFM, WHO
TOP